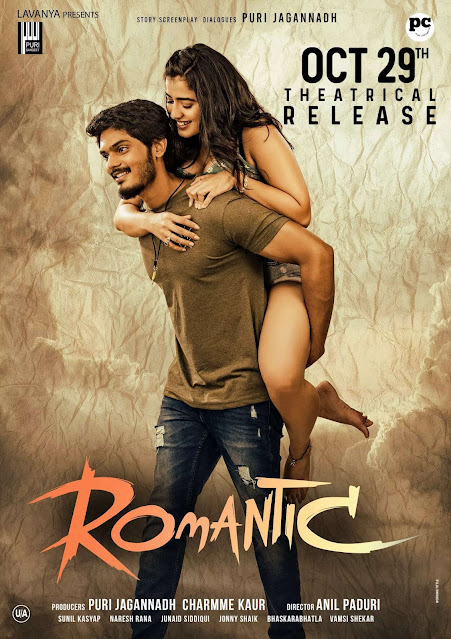 Puri Jagannath is the director who has made many heroes into stars in Telugu cinema. Now Puri wants to retain his star-studded son Akash Puri (akash puri) as well. In the past, Puri has tried to introduce Akash to the screen as a good mass hero with the film 'Mehbooba'. It did not live up to expectations. That is why this time Akash is 'romantic' with a dark love story to please the youth.As brought to the front of the audience. Although Puri did not direct it .. it provided the story and was built by itself. With this film, Ketika Sharma was introduced as the heroine and Anil Paduri as the director. The film has attracted the attention of movie lovers as it has been promoted by top stars like Prabhas and Vijay Devarakonda. Did Puri Tanayudi get success with this movie ? ( Romantic movie review) Did this Romantic movie  meet the expectations of the audience?

Kanthentante: Vasco da Gama (Akash Puri) is an orphan. As a child, he aims to build houses for orphans like himself. However, he enters the criminal empire to earn money. In Goa, there is a power struggle between the two gangs over drug smuggling. Vasco da Gama joins a gang and soon becomes the leader of the gang. At the same time, he became the most wanted criminal for the Goa police. However, the government will field ACP Ramya Gowarkar (Ramya Krishna) to stop him. Her goal is to end Vasconi and his gang. As Govarkar enters the field .. Vasco will face many challenges to achieve the goal. Maunika ( Ketika Sharma) ( ketika sharma ) in this order) Will also have trouble with Vasco's romantic journey. How did Maori deal with them Vasco da Gama? Vasco Chikkada to ACP Ramya? What is his romantic (romantic ) relationship with Maunika ? Is it love? Or does he just not pay attention when you tell him something to do? That should be seen on the screen.

How it went:  This is a story set in Goa. In fact, the above story seems like a short line in the movie. The real story revolves around the action, the romantic (romantic ) season. It is interesting how Puri invented it with Anil Paduri in his own style. In fact, almost all the stories in Puri Jagannath movies go on like this. Class, Mass Mechchela action frenzy .. Chamakkumane conversations .. A little twist at the end. Did the audience like it .. flour .. or fruit. Movies like 'Hooligan', 'Businessmen' and 'Heart Attack' all went through this process. The 'romantic' that has come from now on also extends inch by inch in the same meter. To be more precise, it feels like a mix of the above three films and taken out.

The manner in which Akash was introduced as Vasco da Gama in the first half. Vasco in the name of fascination .. The scenes that follow along in silence, the romantic episodes that take place between the two in this sequence attract the youth. When the character of Ramya Gowarkar comes on the screen .. the speed in the story increases a bit. However, if the action .. or romance .. If not both, the first half of the song is going to test the audience's patience. If Puri style sparks are to be seen in the second half .. there will be a disappointment for the audience. Ramya Govarkar 's efforts to capture Vasco da Gama are going very well. Repeatedly intercepting the heroine and trying to catch the hero .. Those attempts are so silly that the audience does not seem to be in a position to connect with any episode. The emotional way in which the climactic scenes are shaped .. The tragic ending impresses everyone.

How to do it: Akash Puri (Akash puri) appeared to be a mature actor. Vasco da Gama understood the characterization very well and tried to do justice to the character. His performance in the climactic scenes captivates everyone. However, it would be better to stay away from such heavy stories for a few years. Ketika Sharma looked so beautiful on screen. Didn't find much room to show in terms of performance. Romantic (Romantic)It exploded in the scenes. Ramakrishna played the role of Ramya Gowarkar very well. Her character is the main attraction of the film. Maikrand Desh seems to have not used the role of Pandey in the right way. The characters of Uttej and Ramaprabha are impressed to a certain extent. The main flaw of this film is that it does not make the story interesting. The film does not get logical at any stage. Only in conversations did he show his strength. It is understood that Anil Paduri tried to show that he had given the story he had given. Puri seems to have succeeded in capturing the style. Music by Sunil Kashyap and photography by Naresh Rana.Download this movie now finally you read the full review.

Finally: this 'romantic' for boys

Note: This review is related to the reviewer's perspective. This is the personal opinion of the reviewer only!